While we are celebrating Christmas… 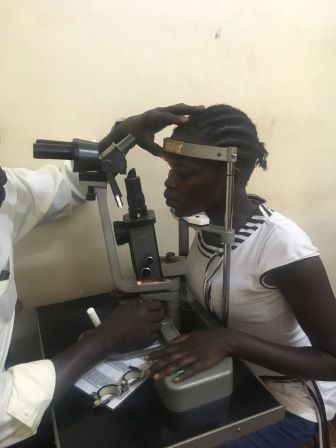 Christmas is here and the frenzy has caught on. In most parts of the world this season, you can see, hear and feel the change, the fun, the chaos and the panic too. This undoubtedly is the happiest season of the year for many, especially children. It was for me as a child.

Upon returning from my ministry outpost in Uganda last week, I’ve been struggling much emotionally. Yes, it’s normal to wrestle with the barrage of issues thrust at one by those that feel God’s presence because of you. Truth is, we don’t have answers for everyone.

I met with a few people on this trip I probably will never forget. I’ve been thinking of them and wondering what their Christmas season will be like.

Meet Viola. She’s a 20 year old South Sudanese refugee. She began to lose her sight at age 10 and by the time she was eighteen, she’d become completely blind. At which point also, she became pregnant and now the mother of 2year old Benjamin.

I met Viola Safari at a refugee women’s meeting I had in Rhino Camp a month ago. I’d gone to follow up on those we enabled to start small businesses there in July and see how they’re doing and if we could assist others to start similar micro businesses in small groups too.

It was a very good meeting. They listened intently, shared their dreams and concerns, asked questions and began forming more business groups there and then.

Just before the end of the Q&A, Viola raised her hand to ask a question. “I have listened to what you are saying and heard what these other women are planning to do. I want to join them too but as you can see, I’m blind. How can I be a part of this?”

Her question cast a deep despair on this gathering of over 150 women who heard her speaking in Bari, her local language. The hush in the hall made the sighs and mourns and sobs from various corners seem louder. I understood why, when her question was interpreted to me. I asked to meet her after the meeting.

On arriving Viola’s home, I met her mother Loice, who’s 55years and also blind. She lost her sight 20years ago. I learnt too that Loice’s mother, now late, was also blind.

After listening to their story, I prayed for Viola and her mother, hoping for a miracle but it didn’t happen. Three days later, I took both women for a checkup in Arua, hoping there could be a medical solution. We visited two hospitals but the results were disappointing. Both cases, according to the doctors can only be reversed by a miracle. I can’t query their conclusion but would greatly appreciate another doctor’s examination. Please who can help?

As I moved them from place to place in Arua, I wanted to know how generational blindness became the story of this family and nothing serious was done to arrest the situation. Is it just ignorance, poverty or both? Who’s the father of her child? Where is he? Did he take advantage of her handicap?

How did they make it to the refugee camp from South Sudan? What kind of difficulties are they living under now? What are Viola’s dreams for herself and her son? What is this Christmas going to be like for her and her family? How can I bring hope to this family and make an eternal difference there?

It’s easy to give money and walk away but money isn’t always the greatest need. These people need vision; a vision better than what the eyes can see, a vision of an end that can’t be seen by merely looking but by believing.

Hope in what only the eyes of faith can see, is the God kind of vision. They don’t need handouts but a work or a skill, one that will help redefine their worth, to themselves and their immediate community. Their stability rests in ensuring that this disability is not embraced as inability.

Though their Christmas celebration this year may not be like yours or mine, by God’s grace and with your support, we shall bring lasting hope to Viola and her family. But they aren’t the only ones. Wait for Part 2.