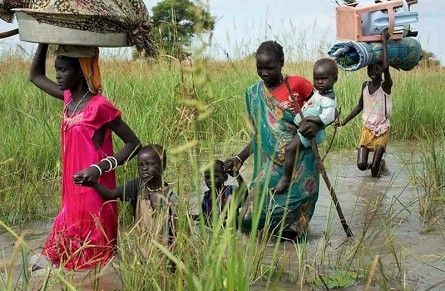 In June 2005, multitudes of refugees from Southern Sudan were returning from neighboring countries and beyond, when I made my first missions trip there. The over 20years civil war ended in January.

The wretchedness of these returnees was shocking. Many of them bore the ugly scars of unhealed trauma. “I’m traumatized…” was used frequently to justify bad behavior. Sadly, most of us then knew little to nothing of trauma and its crippling powers.

The lessons I learnt from those refugee returnees then, and the very depressing conditions they arrived home in, is helping my ministry formulate a plan for service delivery among South Sudanese refugees in Uganda today.

Fast forward to February 2017, almost two million South Sudanese are back in refugee camps in many countries and another two million are internally displaced. As sad as this is, it seems the rest of the world is getting tired of the unending crisis and atrocities that seems the bane of this young nation.

Our tactic for addressing poverty and bringing the kingdom within refugee communities in Uganda aims at first, confronting the huge challenge posed by the trauma and then helping them develop the right attitude, from which progressive self-help initiatives can be birthed, as against a one-way transactional giving of handouts that breeds paternalism.

We are persuaded that our discipleship strategies will thrive best within small groups in targeted refugee communities, where flickers of hope exist. The big question is, how? How would hope to birth again occur in such desperate places? What would trigger the needed shift to enable these broken hearts dare to dream here?

While pondering on these questions and praying for God’s leading, I met a brother in Rhino refugee camp who knows my passion for the youth and ministry work in schools back in Yei, South Sudan. He said, “Uche, there’s a primary school started by refugees down there. Do you want to see it?” This was in late February 2017.

On the way to this school, I said to my wife Sola, who was with me, “…this act of starting a school is a sign of hope for this community.” When we arrived at the school, classes were over and most of the school kids had gone home. Standing with the few teachers and community leaders still around, I heard the Lord say, “Start here”. To my surprise, this school was called Hope Primary School. It had registered over 400 school children within 2weeks of its existence.

I knew immediately with no shadow of doubt that this school would be our primary platform for service delivery among South Sudanese refugees in that area. However, the question of “how” still wasn’t answered?

After inspecting the classes and the surroundings of the school, I shuddered at the magnitude of collaborative effort invested by this refugee community to have a primary school at all cost for their children. I promised the teachers and leaders present that we’d help cover the classes with iron roofing sheets.

The provision of the first installment of the roofing sheets gave me a clearer understanding and the answer to how help could be offered to refugees humanely.

How to bring lasting healthy support to refugees is by letting them take the lead, and journey alongside them as they accomplish their dreams and chase their hopes. Any attempt to lead them with handout or our own ideas without first listening to them and understanding their heart, will lead to waste of time, resources and disappointments.

These refugees in Ocea C Settlement in Rhinocamp are poor and completely beaten by their assortment of loses. However, they knew that education for their children was of utmost importance and are willing to make the necessary sacrifices to see their dreams actualized, even in a refugee settlement.

Details of their efforts and sacrifices in Part 2. You’ll be pleasantly surprised.