How We Got Here: It’s a New Thing 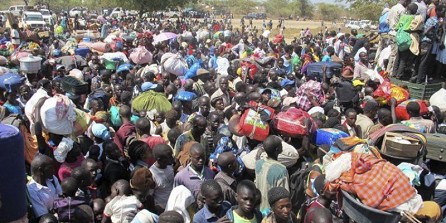 The peace agreement signed in August 2015 brought to an end the South Sudan civil war that ensued on 15th December 2013. When I read through the agreement, I was apprehensive.  Critical components of the binding document created inescapable uncertainty and the possibility of war.

The one question I asked on several fora was, “Can any of the two principal leaders at the center of the commotion concede victory at the ballots in 2018, when they didn’t lose at the battle front?” These are men of war, men whose youth and years are consumed by suspicion, betrayal and bitterness from generations past.

As I chewed on this matter, I had a witness in my spirit that peace was going to come through a rather tough path. So I determined to seek a temporary place in Koboko, a town in northern Uganda, some 80km from my location in Yei, where I could quickly retreat to, in the event of anticipated trouble come election day in 2018. I was close to signing a land lease agreement with a village in Yei that had accepted in principle to give us a large piece of their land for Ministry.

On 1st January 2016, I got a call on my cell phone while leaving the beach in Lagos with my family. It was a number I didn’t know calling from California, USA.

“Hello am I speaking to Uche?”

“My name is Jerry Musgroove, do you remember me? You were with us in California last summer…” (I met this awesome man of God through a mutual friend, Pastor Glen Totten.)

Yes I remember you Sir…

“The Lord gave me a word for you and asked me to call you now and deliver the message to you. I was concerned of the timing, as I don’t know which part of the world you are in now. But the Lord said to call you now. Is it a good time to talk?”

At this point, I pulled over.

“The Lord said to give you his word in Isaiah 43:18-19. He read it, “Remember ye not the former things, neither consider the things of old. Behold, I will do a new thing; now it shall spring forth; shall ye not know it? I will even make a way in the wilderness, and rivers in the desert.”

I was pleasantly surprised on many fronts. There’s no way I could appropriately process this scripture in the light of my present realities as at that time but the word was profound, to forget the past and be ready for something new.

On my first trip of the year to South Sudan in March 2016; I arrived Kampala and needed to see my bank account officer. I casually mentioned to her that I was thinking of getting a place to stay in Koboko. I explained why and she shocked me.

“Uche, the Regional District Commissioner of Koboko just left that seat you are sitting on few minutes ago. Do you want me to call her for you?”

I met the woman that evening, took her counsels and directives and headed out same night to Yei en-route Koboko. My journey into new things and express accesses in Uganda had begun. I didn’t even know it.

I met Brother Joseph Dradria few days later in Yei. Our connection was awesome as we shared common passions for ministry. I muted my plans for Uganda to him and why. He promised to assist. His assistance has proven to be heaven’s arrangement.

I rounded up that mission trip scheduling a meeting with another community in Yei, that had agreed to give us land for ministry. The date for signing the deal was set for the 20th of July 2016. I’d bought my flight tickets all the way to Yei. But the second civil war after 2011 independence began on the 8th of July.

I made my trip as planned but stopped in Arua, knowing I couldn’t proceed to Yei. War had broken out. My ministry partner in Yei, Pastor Stanley was mobilizing an audacious pullout from Yei with the Dreamland children, staff and other families. Death was at the doorsteps there.

While in Arua, I scheduled a meeting with a gentleman that is responsible for NGO/ government relationships in Koboko. He arrived at the meeting venue while Bro Joseph and I were waiting for him and to my amazement, I learned that Brother Joseph had led the gentleman (Simon) to Christ some years back.

From then on, doors began to open in rapid successions as I met several key leaders in the region, building relationships, studying the new realities on ground and listening to the Lord. One such leader is Rev. Dennis. He was introduced to me by Brother Joseph.

In a meeting with Rev Dennis Ruhama, where he’d invited the Bishop of Madi and West Nile Diocese in the Church of Uganda in December 2016, I articulated four core areas of ministry I sensed the Lord was leading us into: –

Responding to the refugee crisis is new: – Through the support of Adventures In Missions, Parakletis and other friends, we are responding to the immediate needs of refugees and supporting their dreams. But more importantly, we are building structures that’d sustain these support initiatives. Click here for some updates and please like our page.

The direct outreach to Muslims is new: – Through the support of Norm Brinkley and friends, we brought the training- Encountering the World of Islam to many key leaders in Arua in April 2017.

Responding to the development needs of the youth and students from South Sudan in a refugee setting is new: – Building the Greater Hope ideology within the schools in the refugee camps is a strategy for youth development we are incubating. But there’s more, so much more.

Capacity building within and outside the church is new: – The need is overwhelming and the opportunities are rife. For an enduring missions’ thrust beyond the region, a deliberate effort at empowering the clergy and grooming professionals to see beyond the pay package is critical.

We are thankful and delighted to know the Lord is the One doing these and has graciously invited us to join Him. Nothing can be more satisfying! He said, “I do a new thing…” We are following His leadership, knowing He is here and we’ve relocated.

By God’s provision, through many friends and the tireless efforts of Seth Barnes and the team, we’ve bought a piece of land for our ministry base in Arua. We shall make our home here, train and host teams of volunteers and launch from here to everywhere.

As we render assistance to important concerns especially among refugees now; building sustainable channels for lasting ministry impact, constructing the proposed base and raising teams of volunteers to connect with a wide array of ministry opportunities in the region are core priorities presently.

We need volunteers, human and material resource managers. We need workers committing to women, children and the youth. We need medical aid workers, teachers, micro business experts, media assistants and as many as would commit medium to long term. We need funds for these.

It’s a new path, a new work and walk, all in the same direction and destination.

We invite you to join us and stay the course as we continue to bring the Kingdom where it’s needed.